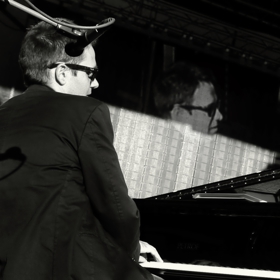 Before leaving for the United States, he had made several radio recordings with Czech collaborators (Petr Dvorský, Vlastimil Trllo, Kamil Slezák). Then, in 2008, he released his almost exclusively original album “Returns,” with Daniel Foose on bass and Ross Pederson on drums. The trio performed at many jazz festivals and clubs in North and South America (Washington DC, Dallas, San Antonio, a tour of Peru, Bogota in Columbus, Toronto, Canada, Pensacolla in Florida). In 2009, Jiří won the first prize at the prestigious Phillips International Jazz Competition, where he sat in the jury a year later. In 2010, he participated in the Jacksonville Jazz Piano Competition (Florida), winning the 3rd prize.

Jiří currently devotes his efforts primarily to playing in a trio and other small ensembles. Jiří´s jazz compositions are to some extent influenced by classical music, to which he is fully dedicated as a pianist and composer. He is mainly inspired by the expressiveness of post romanticism and the Second Viennese School, a music based on looser harmonic ties or even atonality. The sonic colors of his compositions and the sensitivity of his orchestration showcase the nuances that are often associated with the experience of classical music.